Well done to all who came along to what was first outings at the club for both bands at the weekend at the club with both proving a massive hit with those who committed to an advance ticket and then showed up on the night. So bravo to KILLER INSTINCT and READY STEADY 60's for some top live entertainment. Much appreciated as ever also to those who rocked along and danced the night away upstairs too.

We have more of the same great mix of live music and rock club action heading your way week after week still to come that looks like are going to be more epic nights in the run to the festive period. Everything is listed on the website 24/7 where you can get all the info and buy a ticket.
To this weekend and we kick off THURSDAY night this weekend with some INTERNATIONAL GRADE musicians.
THURSDAY 18th NOVEMBER.
KYLE HUGHES - The Young Newcastle Drummer has already made an impact in the world of music performing on the same stage as Jools Holland, Simple Minds, Scouting for Girls, Texas, Adam Ant, Ron “Bumblefoot” Thal (Guns N Roses) and The Jacksons. Kyle still continues to tour all around the world with various bands and artists, Bumblefoot (Sons of Apollo, Guns N Roses) & Marco Mendoza (Whitesnake, Thin Lizzy) to name a few.
TOMMY GENTRY - Guitarist for GUN, MARCO MENDOZA, VOODOO SIX, BAZ MOORE and ZICO CHAIN.
MARCO MENDOZA - who hasn't he played for is probably easier to list but currently with Journey.
Amazing support from BAD ACTRESS as well.
What more could you want on a Thursday night !!!???
This might be a one off chance to catch Marco and the lads for a while also it's the LAST night of their current tour for a wee bit so make the most of it and grab a ticket in advance online. Some tickets have been allocated to buy on the door as well from a few who have been asking ---->>> http://skiddle.com/e/35891691
Please Note this is a downstairs event only. Doors 7pm Bad Actress on stage 8pm 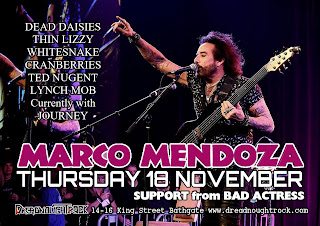 FRIDAY 19th NOVEMBER
Battalion of Flies, Royal Bloom and Shallow all hit the stage for a Grunge and Rock night. Tickets still available online in advance but have an allocation set up for paying on the night as well for this one ----->>>> http://skiddle.com/e/35784172
Doors 7pm. First Band on 8pm 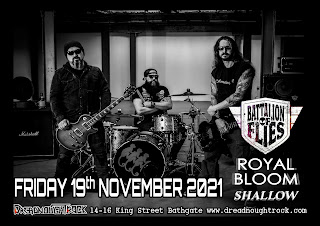 SATURDAY 20th NOVEMBER
Welcomes back PORK PIE and an amazing night of all the classics from the Ska era. All the big hitters in the set that sold out in record time again. HOWEVER some ticket holders are offering some spare tickets via the event RE:SELL facility so if you left it too late and would still like to come get over to the event and snap them spare ticket up and join us ---->>> http://skiddle.com/e/14221600
Doors 7pm - Approx Stage times 8.30pm to give plenty time to get in - get a good dancing spot and a couple of drinks ahead of some serious dancing. 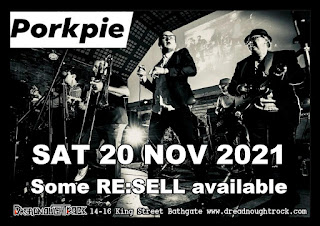 NO Covid Passports/Vaccine Status checks required for these live events downstairs.
Only required for nightclub entry upstairs when open.
Full details on all that via website also ongoing requirements such as masks and track and trace.
In other news this week we have announced the cancellation of The Gathering III on 5th Feb 2022 due to very very poor sales. In the last 12 months despite offering early bird deals and the roll over of sales from the postponed Feb 2021 event it had only sold 14 tickets online. A massive amount of folk had taken the time to go onto the event page nearly 10 times the amount of the 2020 event. So why not a better uptake for a great all day line up - who knows but we can't gamble in the next two months triple figures of tickets will move.
Posted by Dreadnoughtrock at 12:44