As we say cheerio to another month of Live Music with the awesome SKYLINE and NIGHTFLY and another damn good rocking the outlook seems better this week for some reason. 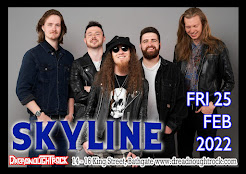 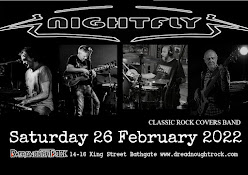 Not only do we get a step closer to our 50th Party nights detailed on the website and more top live nights, we also look forward to a more normal way of operating and everyone hopefully coming out more once again as Spring enters the air.

After all we can only rock along if you do.

We'll certainly encourage as much as we can but ultimately if you want to see top bands hit Bathgate you have to grab a ticket in advance once more and avoid last minute as that right now is the main factor on why so many things are still being postponed elsewhere and we take it on the chin in the meantime. I'm sure that cycle will end but please grab a ticket as soon as you can and show your continued support as it is still very much needed.

March has a full schedule of events all laid out on the website featuring a special EP LAUNCH NIGHT from JASON SWEENEY, A cracking heat for METAL 2THE MASSES, first time outings for awesome covers bands, return of popular bands and help ma boab - The Polis rescheduled date finally arrived.

Oh and other plus this week is the Scottish Government have announced their living with covid plan taking away the legal stand points and returning things to you and I or in other words personal choice.

We have long opposed the covid passport scheme and despite legal challenges, massive division with people and upset caused to both staff and customers alike at last it is being dropped as a legal requirement forced upon all nightclubs in Scotland to see vaccine status as a condition of entry with the fear and threat of prosecution if we did not. It was never going to work nor was it ever going to reduce anyone's risk of transmission that was glaringly apparent when Omicron came along and all nightclubs were actually closed.

So with this dropped from 28th February we hopefully can see an upturn in nightclub traffic again especially from those who didn't obtain their proofs, couldn't obtain them or like us were opposed to it all. Hopefully it will also remove the doubt or uncertainty on what to do or what was required before or after the live events too as we step slowly into March and more normality creeps back to our lives.

We have done our upmost to keep all staff and customers as safe as possible and mitigate risks which where possible will continue in some part. For example we will maintain the hand sanitiser points which helps your hand hygiene as well as the ventilation we have always had in place which we feel has certainly helped keep a lid on transmission at the Dread along with you guys doing what was right and following the reminders.

The legal requirement for wearing a mask continues to 21 March and we will still be doing our best as we have throughout to remind you to simply pop a mask on when going to the bar or wandering. The LEGAL requirement for this will come to an end and become guidance. For anyone that still feels they want to wear one you will be supported especially on a busy night as it is still your choice to do so.

A full updated set of guidance as ever will be maintained on the home page of the website.

In other news we set out another upgrade to the club a year ago to move the ladies loos downstairs away from the stage area to next to the gents ones as well as the accessible toilet for anyone to use. It's been a hard slog thro the covid closure periods, material shortages, cash juggling but have slowly edged forward to getting within touching distance of being finished.

This upgrade will help a lot on all nights but massively on larger scale live nights. The flooring is now down which just leaves cubicles to be assembled, the loos located and some other joinery work to round off another addition that improves the layout and usability of the only place that rocks every weekend. I know sounds easy but still a couple of weeks work. Fingers crossed by mid-late March I can christen it lol. Quality checks etc etc.

Finally this week we have laid out the 50th Plans and already launched some special nights along announcing the return of Blaze Bailey the former front man for MAIDEN in May 2022 no less but one that I have been chasing for a while now comes to life this Friday 25th Feb when a man called Dan that has been with us 3 times over the years solo brings his internationally renowned BAND to town. In the words of Boaby the barman - You'll pish your frillys....hopefully after you bought a ticket.

Posted by Dreadnoughtrock at 15:50 No comments:

A milestone achievement even in normal times but with covid and various challenges it even more impressive the wee rock club in Bathgate has chalked up so many years and still going strong. 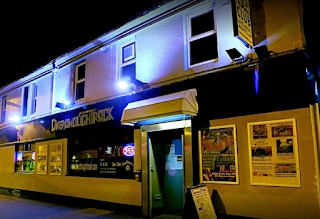 This piece was submitted to the Daily Record/Courier but this is the full version :

Bathgate has long held its reputation as the music capital of West Lothian, and that is due in no small part to the Scottish music institution that is DreadnoughtRock.

For literally generations music fans across Scotland flocked to Bathgate to see what all the fuss was about.

The club has a legacy to uphold – some of the same DJs have performed in DreadnoughtRock for 40+ years, with the newest DJ having a tenure of JUST four years, along with certain bar staff who have worked for us for decades too.

The team behind Dreadnought don’t remember exactly when the venue first opened to the day, but after looking through accounts and listening to the oral histories of long-time customers and friends, they narrowed down the time of opening to around April / May in 1972 - give or take a month or so.

Regardless, Douglas Croft took over the rock disco from Studio 4 around 47 years ago who started the ball rolling in 1972 are now set to celebrate their golden anniversary in 2022 with Douglas still at the helm.

Alan Russell, the operations manager of DreadnoughtRock spoke about being open in Bathgate for 50 years, he said:

“It’s fairly unique for any company to be open 50 years, never mind in our line of work.

“I’ve been involved with Dreadnought for the last 25 plus…. years, and I’ve seen the scene change massively in West Lothian.

“Back then there were at least eight nightclubs in Bathgate and around 15-20 in West Lothian - now I think West Lothian only has three altogether.

“That just shows how phenomenal it is to be open this long - and I think what makes us have that staying power is that we simply gradually evolved with all who came along for a great night out dressed to the nines or arse hanging out their jeans. All that mattered was everyone enjoyed themselves .”

Ten years ago the club's 40th anniversary night invited a total of 100 people on a Sunday night, which quickly escalated into a chaotic party with many more looking for invites as word spread.

Following on from their 40th anniversary celebrations in 2012, the management are keen to expand things this time so not to miss anyone out as keeping track of all who have been part of the history would be impossible - so have decided to host four nights of celebration now scheduled on their website events page.

The four nights will allow for all the ex-staff and customers of Dreadnought to come back and relive their glory days from the club's half a century's worth of history.

The club got its name from the Old Dreadnought Hotel, the original venue that sadly closed around 2006 when Swallow Hotels, the owner of the hotel at the time went into administration.

Despite the loss of their spiritual home Dreadnoughtrock carried on, eventually settling at its new venue on King Street in Bathgate where it’s been for nearly 15 years.

“While nothing changed dramatically over the years in regards to the rock ethos, we’ve evolved the types of rock music and introduced more live bands from local to international standings that still provide a safe and enjoyable place to be.

Granted many things have came and went over the decades but so much of the spirit of the years gone by remain that made the club special. That very much is down to those who came and made it special that we hopefully will see passing down to the next generation. We hope that continues in the future.

“We’ve been rocking through some torturous times lately, of course Covid has hit us hard, and a multitude of other factors throughout the decades but we are still here and still rocking every weekend.

This is not purely just down to the teams behind the scenes hard work over the years but to all who have came and been part of our history.

We thank you all and look forward to the years and decades to come.

Read more »
Posted by Dreadnoughtrock at 12:59 No comments: