At long last Covid Passports are NO MORE.

Since October 2021 until 28 February the LEGAL requirement imposed on all nightclubs in Scotland and some other business sectors has ended. Many people were unhappy about it including ourselves but as a business had no choice legally to ask for proof of vaccination to enter the nightclub. We could have lost our licence ultimately and to those who didn't see our dilemma that division and uncertainty has now ended as we hopefully now move forward to a more normal way of doing things especially in our 50th Anniversary year.

To all those who helped and obliged on this which wasn't the end of the world a massive thanks. To all those who couldn't help verbally abusing our front line staff or agued we were wrong also on why they couldn't get in hopefully you will now realise it was the last thing we wanted or needed at the time which the whole industry argued against and even took legal action against this imposition which from the evidence still being produced made no difference to transmission levels in that 5ish month period, one of which we were forced to close again.

Hopefully the madness, confusion and division this all caused has ended and we can get on with what we do best.

Thanks again and hope to see you back in rocking over TWO levels at Scotland's longest running rock club now in it's 50th year. 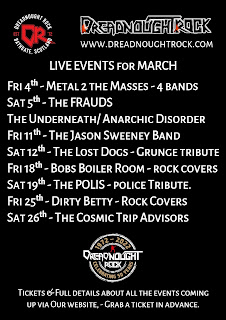 Head over to www.dreadnoughtrock.com for all the low down on What's On.