It's been a hectic and rapid four months since being able to open again after the Omicron saga back at the end of Jan / start of Feb that now seems only a distant memory as we hit JUNE.

Again a massive thank you to all who came along to a superb live event or rock out with us, as you emerged the lockdowns same as us again to get back into the swing of things as quickly as possible, or for many the first time in nearly 2 years which is hard not to take for granted as we opened, shut, opened - shut over and over since March 2020 so lost track of time and circumstance for all those who frequent Scotland's Longest Running Rock club in it's 50th year. You might have seen that btw.

Well done to the procession committee for a great day despite the massive challenge of last couple of years to get it back on for the town also landing very lucky with weather too. Bravo.

Well done also to all those who came and rocked with us, Brother Fox, Fastforward and thro till 3am with the rock jocks to get June rolling for us.

Before we get to this weekend.....

Wee story from this morning putting the bins out when someone stopped me and asked how we were getting on, saying well done for getting thro the pandemic as it would have been a disaster if we had been forced to call it a day and then oh you'll have been kept going and busy with the Galaday.

I said "thanks, we are getting there but still quite challenging - but no it wasn't as we expected I'm afraid for the Galaday weekend also we also had alot of changes to our planned schedule to deal with which were a bit unfortunate".

"Oh I assumed you would be mobbed "said the passer by.

"There seems to be alot of assuming going on at moment" I replied, wished the passer by a good day after a wee blether and thanking them for the good sentiments.

I thought as I did rock on with those living the dream tasks now sporting my marigolds - are folk actually assuming we'll be mobbed and don't come in assuming it'll be too busy for them, like wise with Download coming up this weekend more assuming that we'll be quiet as everyone will be away so don't bother coming (that's true btw), all the while I'm now assuming they have developed the ability to see into the future, see through walls as they pass or read others minds now ?

Then to not offer their invaluable services to us is quite rubbish !?

Mind now racing as I kept scrubbing places you don't want to know.....Next folk will be assuming that as we are a rock club that motorbikes tear up and down inside and everyone head bangs constantly dressed in leather or denim, its all dark, smelly, dirty and have to hover when going to the loo or even we have a cash cow round the back that farts fivers and shites 20's out into our matching Ferraris in our multi car garage beside all our other super cars, yachts and helicopter (just one as getting two were too dear during lockdown). Even assume as we are a live venue and nightclub our bar prices will be fortunes more when in actual fact they have always been inline with a pub that offers nothing like what we do, for example we have quality beers starting from two quid at the mo but some also assume it'll be better doing pre-gig drinks elsewhere (mibbey thinking it will be loads cheaper) then only to realise when they eventually arrive it would have been a better shout coming early, getting a good spot catch up with those waiting for the gig to start and hearing the first few songs not half way through as we have the same or even more choice than previously assumed on tap, in bottle or on the gantry. Not to mention it actually helps the venue that puts on all the entertainment on they were coming to see in first place.

Next folk will be assuming we will automatically be here for their next annual visit.

Well I don't know about you but I think simple answer to all that is.........to stop assuming as there can be way too much of that going on these days. (Unless of course you can see the future etc then please give us a call)

Ask, read, message, check the website or the gazillions of reminders and posts each week via social media or THE most simple of things - just come in and see for yourself after all we are open every Friday and Saturday from 7pm to 3am with a massive variety of bands each week from the heaviest rock bands on the planet such like UB40 tribute One in Ten or Pink tribute Pretty as Pink with death metal gods Pork Pie (who are actually a ska band that pack the place each time they play) also Bessie and the Zinc buckets (who are a rockabilly band who also pack the place) amongst others too many to mention (but are listed in our events) then to also feature International grade artists that have me speaking nice to my Swiss bank manager to convert some of our gold reserves to cash a few times a year that you won't get a chance to see anywhere else in West Lothian to finally have local lads looking for their first bigger gig helping them move into the big time as we have done over the years.

Assuming there are no questions at this point time and you assume I'm done assuming to move onto this weekend with another two nights of live music and nightclub action ahead as we rock every weekend. 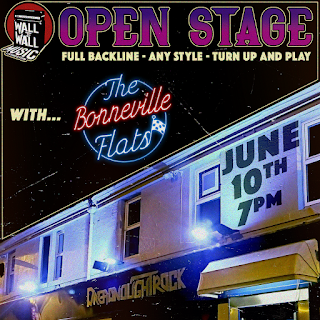 Sure we've had an open stage night before but not with a house band in place to play to you and along with you. Where you can jump up and sing with them or bring your bass, gtr or sticks and play, assuming you can play and sing not just kid on its rockaoke. Either way it's great to do this in association with Wall to Wall Music and The Bonneville Flats. So with free entry to 10pm whats holding you back looking in and joining in ?

This Saturday after a long period due to the old covid we welcome back the only Zappa tribute in the land. Yeah it's an acquired taste but man are these guys good at what they do and let's never assume they will automatically be back if you miss them this time as many tended to do in the past (and possibly still do) 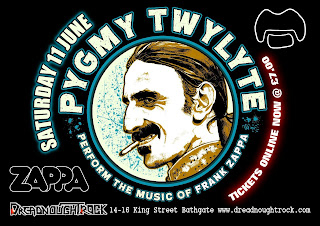 Oops - apologies more assuming going on there. Must stop it as it just makes an ASS out of U and ME.

As always all the info you need, event info, timings and tickets on the website assuming (damn it) you remember it's all there at www.dreadnoughtrock.com 24/7.